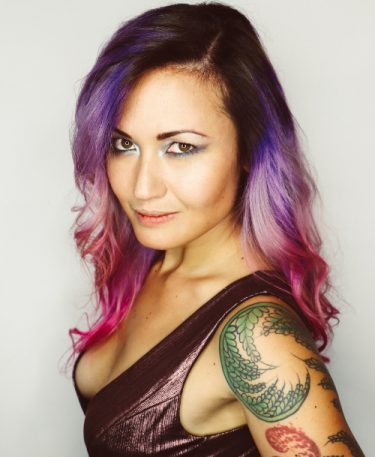 Filling the air with sparkles, strings and synths, ill-esha is a joyful architect building musical bridges to create community. From keytars to jam jars, no surface is safe from her sonic science experiments. Weaving rich organic textures through meticulous electronic framework, her songs express a lifetime of passion for human connection with an ever-changing toolbox and palette.

For many years ill-esha has weathered the dynamic, often ephemeral soundscape of Electronic music, simply by being an original. “I’m not really an observer. I’m very much a participant and a creator,” self-describes the Vancouver (BC)-born producer, instrumentalist, songwriter and DJ. “Everything I do in my life quickly becomes way more than a hobby.” From growing up in the progressive electronic scene of the Pacific Northwest, attending raves in her teens, ill-esha accelerated her musical passions to the fullest. “First I wanted to be part of this culture as a DJ, doing vocals and curating music. After that, I also needed to participate in the music I was playing,” referring to her progression as a producer and headlining performer. “I’ve just been moving one step up at a time over the years, into being this completely original show.”

Although ill-esha’s professional career dates back to the late 90s, the Denver, Colorado-based artist asserts that her recent evolution in music greatly contrasts with her initial work. “I spent about a decade in the Drum & Bass world. I was one of two Drum & Bass female MCs in the whole country, for a long time. That’s how I got my start, and started touring.” Delving further into making the kind of music she wanted on her playlist, ill-esha’s journey broke out of genre. “Something about Drum & Bass just isn’t what I make,” she says, becoming a pioneering artist in the Glitch Hop movement and more recently Future Bass. Even that musical taxonomy is something that today, the veteran shakes off. “It now means something very different from what I do.” In 2013, ill-esha’s music started to gain more major headway, tied to three separate tours, alongside Bassnectar, Beats Antique, and Big Gigantic. With the increasing dates and venues, the artist remains committed to her audience. “After that experience, I upgraded my set-up. Now I have custom stands, instruments—even if it’s heavy and expensive to travel with, I’m proud that authenticity is what matters most in my music.”  Passionately committed to both teaching and learning, leading youth workshops and even administrating one of the largest Discord chat servers for EDM Production, ill-esha believes in paying it forward and building community through music. She has performed in more than 20 countries across the world at legendary events such as Boiler Room, Coachella and Lightning in a Bottle.

A fully dimensional artist, ill-esha remains in touch with her DJ past while incorporating everything from keytars to loop pedals. “In my live shows, there’s an extra layer of freestyle energy. I think it’s really important to make each show special, and make people have to actually come out and see you.”